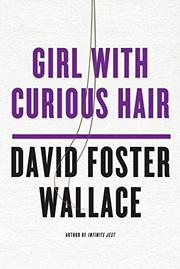 Wallace follows his debut novel (The Broom of the System, 1986) with this collection of nine stories and a John Barthian novella. The best of the pieces, often drawn from the media or topical events, are inventive, entertaining, and inspired, while others—including the novella—can be all too glib and mannered. "Little Expressionless Animals" (which received the 1988 John Train Humor Prize from the Paris Review) is a zany, fast-paced romp through la-la land: Julie, a bleached-blonde lesbian with an idiot-savant brother, lives through a three-year winning streak on Jeopardy. Wallace—along with the reader—has a great deal of fun with backstage politics and a media-inspired hysteria that wrecks people. Meanwhile, the title story turns Less Than Zero into parody: a young Republican hangs out with a group of L.A. punks (Gimlet, Big, and Mr. Wonderful) at a Keith Jarrett concert—the tale is tantalizing in its facility with its milieu (here, Wallace's feverish prose finds a fitting subject) and even the expected stylized violence at the end outflanks clichâ€š In "My Appearance," an anxious actress narrates the antics surrounding her appearance on The David Letterman Show. While there is a little too much media analysis (Wallace is fatally fixated at times on superficial forms of glamour), there is also some good satire. After those three stories, however, the pickings grow thin: "Lyndon" is a predictable, too facile mock-memoir about LBJ written by an aide and shot through with quotes about the former President, while "Here and There" and "Westward the Course of Empire Takes its Way" (the novella) are jargon-ridden, archly metafictional, and too clever for their own good: the novella, especially, is surprisingly jejune. In all, the work of a prodigious but still developing talent too much impressed with his own gifts and with some current critical theory.