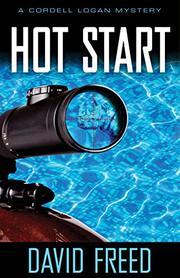 A wisecracking flight instructor turns sleuth once more to save a fellow ex-military man from a murder charge.

Roy Hollister makes a fortune running high-priced safaris and boasts about them; his license plate reads “EAT LION.” So it’s no surprise when he’s found floating facedown in his pool, shot in the head. Sadder, though, is the killing of Hollister’s wife, Toni, who reportedly had no enemies. Animal rights activist Dino Birch, arrested for the murders, seems headed for conviction. Enter Cordell Logan, an ex-government assassin who wants nothing more than to fly the vintage plane in which he gives lessons and sack out in his hammock but who keeps getting drawn into baffling whodunits (The Three-Nine Line, 2015, etc.). Because Logan feels indebted to Dino’s uncle, Gil Carlisle, he visits Dino in jail but can’t make the leap of faith to "not guilty." Still, a sense of obligation to Carlisle, who claims that his nephew’s being framed, prompts Logan to investigate further. He finds possible links between Hollister, a crooked politician, and an international call girl ring. But the more Logan learns about Dino, like his sniper training, the more uneasy he becomes. The case takes him to Prague, where he avoids an assassin but gets close to the solution. Dogged reporter Danika Quinn helps him put the pieces together, and periodic comic relief is provided by his crusty old landlady, Mrs. Schmulowitz.

Freed’s fifth mystery has a great pace, abundant humor, and a lively cast of supporting characters.