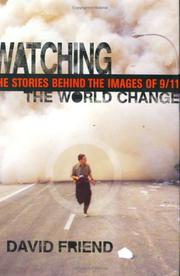 The Stories Behind the Images of 9/11

A photojournalist (formerly of Life, now Vanity Fair) examines the images of 9/11—from the iconic to the lesser-known—and discusses photography’s pervasive presence in that disaster and in contemporary culture.

Friend first tells the stories of those photographers, amateur and professional, who had cameras pointed at the World Trade Center on that crisp fall morning, then moves into a fascinating description of the use of photography in the aftermath. He talks about photos taken from an NYPD helicopter; the video of George W. Bush in that Florida classroom, as an aide whispered to him the news; the photos and X-rays used to identify victims’ remains; the proliferation of posters featuring the images of missing loved ones; efforts by galleries and museums to display artifacts and photos; the anger many felt when images of the catastrophe (and of Ground Zero) were sold for profit. He explores the efforts of the electronic media to cover the crisis. He discusses the possibility that a video of Osama bin Laden released just before the 2004 election helped Bush defeat John Kerry. He tells of people who claimed to see images of angels and devils in the clouds of smoke billowing from the buildings. Friend introduces a fireman’s widow who ate her meals looking at a large photograph of her husband positioned in a chair across the table. He examines the role of photography in the lead-up to and execution of the military actions in Afghanistan and Iraq, including Colin Powell’s presentation at the U.N., the “imbedded” photojournalists, the president’s “Top Gun moment” on the carrier Abraham Lincoln, Abu Ghraib and more. Friend ends with the complex story of what became a symbol of Ground Zero: the celebrated image of three firemen raising the American flag—à la Iwo Jima—in the rubble.

An informed and intimate account—accompanied by some disturbing photos—of one of the worst days in American history.