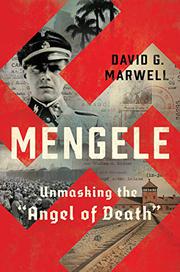 Unmasking the "Angel of Death"

A chilling biography of the terrifying doctor who led a charmed life through the Nazi ranks—and eluded justice for decades.

“In 1985,” writes Marwell, “while working in the Office of Special Investigations at the U.S. Department of Justice, I was assigned to the international investigation to locate Mengele and bring him before a court of law.” Though the author, the former director of the Museum of Jewish Heritage, explores Mengele’s life and experiments at Auschwitz, he concentrates on his postwar flight and his ability to resist detection as a war criminal and reinvent himself in South America—a journey largely funded by his family’s manufacturing firm back in Germany. Trained in Germany’s finest schools, Mengele became a medical doctor with an intense interest in anthropology and racial science, and he was influenced by the prominent anthropologist Theodor Mollison, who focused on “racial science.” At the infamous Frankfurt Institute in the late 1930s, Mengele’s dissertation on the heritability of oral clefts “served to underpin” the Nazi legislation enforcing sterilization to prevent “diseased offspring,” resulting in 375,000 forced sterilizations. As World War II intensified, Mengele transitioned from scientist to soldier and became a combat physician. After experiencing “extreme brutality” with the SS Viking Division, he was transferred to Auschwitz in May 1943. There, he conducted scientific experiments with “unprecedented resources,” which allowed him to “surmount the barriers that traditional medical ethics and basic humanity placed in his way.” His heinous experiments are well documented, as are his movements in the final days of the war and afterward. How did it take so long to find such a highly ranked Nazi war criminal who had reestablished his name in 1956 in Argentina and resumed practicing medicine? Marwell engrossingly describes the capture process as highly political, involving American, Israeli, and German government groups. He ends with an account of the unsettling visit (revealed in letters) by Mengele’s son to see his unrepentant father in 1977.

An eerily engaging life’s work by a dogged researcher that adds materially to the Holocaust documentation.