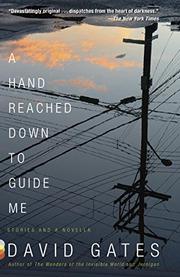 A HAND REACHED DOWN TO GUIDE ME

Stories and a Novella

For his first work of fiction in more than a decade, Gates explores—though maybe the better term is strip-mines—well-off souls hitting the skids thanks to divorce, illness, self-medication, or some combination thereof.

Gates knows his preferred theme, and the dozen stories here stick to it. The opening novella, Banishment, is narrated by a New York journalist who falls for a semifamous architect 30 years her elder. Speaking in a sassy, world-wise, but increasingly weary tone, she catalogs her creative decline (her dream of using her kept-woman status to write essays ends with her whiling away days smoking weed), her husband’s failing health, and an emotional decision that crashes the house of cards. In that story, Gates (The Wonders of the Invisible World, 1999, etc.) displays a knack for burrowing into the lives of affluent, culturally savvy types. But though Gates tinkers with perspective and setting in the remaining stories, their effect is less expansive and ultimately repetitive. “Alcorian A-1949” is narrated by a hard-drinking composer turned cynical about his “oh-so-personal vision.” “George Lassos Moon” follows a theater critic with a drug habit, thrust back into the life of a protective aunt after a drunk-driving arrest. An English professor in “Monsalvat” is maintaining a speed habit while minding her aging poet father. And so on, and so on. Sometimes these stories strain credulity to attain their effect of domestic collapse, never worse than the moment when a doctor’s druggy children take revenge on his new wife in “A Secret Station” by taking a chainsaw to the Thanksgiving turkey. Gates is a graceful and penetrating writer about people who are stuck in a rut. But the rhythms and emotional temperature of these stories have a stubborn sameness of their own.

A well-turned but overly familiar sequence of domestic dramas.