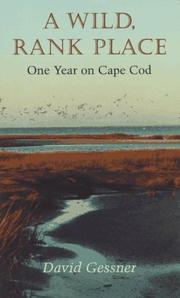 One Year on Cape Cod

While spending a year at the family cottage on Cape Cod, Gessner (a journalist and political cartoonist) aggressively mulls over life, death, and the literature of his elected place. Gessner came home from the Rockies, back to the place where he grew up, after a tangle with cancer. Forget broccoli and phytochemicals. To ward off cancer, he knows his route: ``I'll take salt water.'' The ocean, he believes, will cleanse him, body and soul, but nearly everywhere in this collection of essays—from his anger over the inorganic, hubristic new Cape architecture to a marsh walk while under the influence of psychotropics to a spirited defense of the political cartoonist's pamphleteering art—decay and death insistently preside in the ``stench of the sea,'' a death in the family, the very title of the book. There are moments when Gessner displays a witty, light touch, as in his preoccupation with Thoreau, who pops up again and again, among the stinkhorns, on hikes, beside Gessner's writing table, goading, educating, inspiring. But for the most part, Gessner is a brassy writer, four-square to his issues—environment, literature, family— subjective and romantic in a quietly effective way, for his personal obsessions translate well into universals, as when he witnesses the last months of his father's life, this time cancer claiming its quarry. His father was very much his own man, fastidious by day, refulgent by night after the wine went to work. It is an unflinching portrait Gessner paints of his parent, though also the only time in the book when he allows notes of tenderness and understanding to color his judgments. It must have been an uneasy year on the Cape for Gessner; if this book is any reflection, it couldn't have been a year better spent. (18 drawings, not seen)