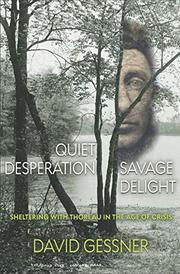 Sheltering With Thoreau in the Age of Crisis

Melding memoir and nature writing, award-winning environmentalist Gessner celebrates Thoreau, whose Walden he discovered at the age of 16, inspiring him to question his values, attend to the natural world, keep a journal, and, as an adult, even build his own solitary writing shack. Now, facing environmental degradation and a global pandemic, Gessner sees Thoreau as his “presiding genius, and guiding spirit.” Examining Thoreau’s enduring relevance, he writes, “in an age of climate change he gets to the root of it: the need to do with less not acquire more. The need to live a moral life despite the risks and the ridicule. And of course the deep understanding of just how much nature can still offer us. Not nature in any vague or high-handed sense but in the physical daily experience of it.” Gessner vividly recounts his rich daily experiences of wildness, including walking, biking, kayaking, and bird-watching in North Carolina, his adopted home for the past 17 years; accompanying environmental activist Rick Bass for a project to save grizzlies; and traveling to Thoreau country—Cape Cod, Concord, and Maine—with his family. “Wildness, unlike wilderness,” he writes, “can be found anywhere.” Writing this book during the first seven months of the pandemic, the author reports the increasing numbers of cases and deaths, statistics that serve as bleak epigraphs to each chapter. As much as he asserts “that staying still and finding home can be exciting, even thrilling,” he admits to feeling low-level depression during “this endless night of a year.” He also admits to wondering if it is too late to save the planet and to raise consciousness about the perils of materialism and anthropocentrism. Yet despite evidence that sometimes overwhelms him, Gessner, like Thoreau, finds hope in every new morning and joy in the world that Thoreau so eloquently extolled.

A grateful homage to the iconic naturalist and a pleasant memoir of wildness.