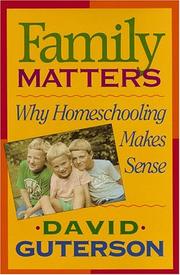 A wide-ranging look at the benefits of parents educating their children at home. Guterson (The Country Ahead of Us, the Country Behind, 1989) teaches English in a Washington State high school, but he and his wife school their own three boys at home. The boys are among an estimated 300,000 or more children nationwide who learn the three Rs—plus science, geography, philosophy, literature, and more—at the dining-room table instead of at a school desk. The boys also roam far afield, visiting workplaces, museums, libraries, and nature centers; joining peers in Little League and swimming lessons or for art, music or drama; spending time with other adults in the community, including a home for the elderly. It's the flexibility to make use of the rich resources of the community that Guterson counts as a plus for homeschooling. But more important, he asserts, is the opportunity to guide children in learning at their individual paces, impossible even in so-called child-centered public schools with their crowded classrooms and mandated curricula. Here are thoughtful and well-documented answers to most of the questions asked about homeschooling. Is it legal? Yes. Some states, in fact, give strong moral and even financial support to homeschoolers. Do the children learn? Overall, they do as well or better on standard tests as children schooled in classrooms—no matter what the educational level of the parents. Are they socialized? This question, says Guterson, has many layers but, yes, homeschooled children have friends and playmates; yes, they learn- -perhaps better than peers who are isolated in classrooms—what society expects of them. Homeschooling is not for everyone, but Guterson sees it as a growing and worthy alternative in an educational system badly in need of fundamental restructuring. A literate primer for anyone who wants to know more about alternatives to the schools.