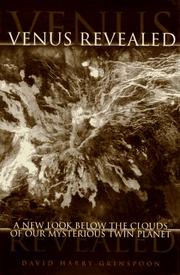 A New Look Below the Clouds of Our Mysterious Twin Planet

Venus is sometimes described as Earth's twin planet; here's an up-to-date look at that world next door. Grinspoon (Astrophysics/Univ. of Colorado, Boulder) draws on data from US and Soviet space missions, as well as conventional astronomical observations (and folklore) to present the most detailed picture of Venus available for lay readers. Venus is the brightest of the planets, and it approaches Earth more closely than any other; its orbit is locked to ours in a complex harmonic relationship that repeats five times every eight years. But its thick sulfuric-acid cloud cover prevented direct observation of its surface, and so imaginative Victorian astronomers had a field day guessing at its features (planet-wide oceans or primitive swamps were common guesses). When space probes began to return data from Venus, they brought a harsh blast of reality. Surface temperatures turned out to be close to 900 degrees Fahrenheit, and the atmospheric pressure was crushing. Our planetary ``twin'' began to look a lot less like home; indeed, press reports invariably referred to the Venusian climate as hellish. But for the scientists Venus became more intriguing: Why should a planet almost exactly the same size as Earth be so different? As radio telescopes and further space vehicles (notably Magellan, launched in 1989— Grinspoon is a scientist with the mission) allowed them to map the surface, they began to find other mysteries: an apparent shortage of impact craters and a surface that betrayed no evidence of plate tectonics, the force that drives earthly geology. Grinspoon speculates on these subjects and on the possibility that life might somehow have evolved on Venus. The author's presentation is remarkably lively—he writes in a breezy, slightly irreverent style, without ever slighting the large body of factual material he presents. A solid, thoroughly enjoyable presentation of almost everything a layman might find useful about one of the strangest planets in our solar system.