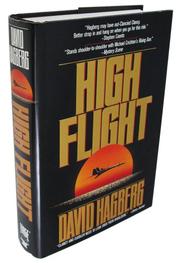 Japan baiting and bashing become fine arts in this complex but effective and fast-paced technothriller from old pro Hagberg (Desert Fire, 1993, etc.) It's 1997, and Guerin Airplane Co. has called on retired CIA hard-case Kirk McGarvey to check the stop-at-nothing methods employed by a Japanese zaibatsu to take the corporation over. With a little help from tricks-of-the-trade friends in the Kremlin, McGarvey soon discovers that well-organized disciples of Yukio Mishima operating under the Rising Sun banner indeed have designs upon Guerin, albeit as part of a larger plot to give Dai Nihon renewed dominion in what was once called the Greater East Asia Co- Prosperity Sphere. Willing to go to any lengths, Rising Sun has devised a fiendish way to knock Guerin's workhorse jetliners out of the sky upon command. Meanwhile, stateside outlaws with ideological, as well as monetary, agendas stumble on the Rising Sun scheme and appropriate it. Stealing a march on the Japanese renegades (who boast considerable influence in Tokyo), the Americans bring down 14 commercial flights in a 12-hour span. The carnage induces the US to make a military move against Japan that (thanks to the belligerent actions of a rogue sub captain) is already involved in a shooting match with Russia. At the 11th hour, however, McGarvey saves the day, sorting the good guys from the bad, dispatching two archvillains, persuading the president to pull back from the brink, and making the world safe for Guerin to unveil its hypersonic transport with Mach 5 speed. Still, none of the sadder but wiser survivors believes that the US can avoid an armed conflict with the treacherous, dangerously assertive Japanese within 15 to 25 years. Geopolitical escapism of a very high if deeply disturbing order.