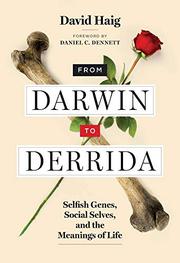 FROM DARWIN TO DERRIDA

Selfish Genes, Social Selves, and the Meanings of Life

Of Mendelian demons, genetic catalysis, and other evolutionary matters having to do with why we’re here.

We are born, we grow up, and we die. If we have fulfilled our biological mandate, we produce others who do the same. Is that all there is? Biologists have long shied away from the question of whether life has meaning. For instance, writes Harvard evolutionary biology professor Haig, the great scholar Ernst Mayr dismissed early efforts as “impoverished and inadequate for understanding the living world.” Charles Darwin provided a framework for that understanding with his evolutionary theories, though, especially natural selection. Haig explores ideas from Aristotle to Richard Dawkins, examining teleological questions that seek answers for the “end” of why we live and what we live for. The author accomplishes this with, among other avenues, a detailed exploration of how genes work. Sometimes his explanations are resoundingly clear, as when he likens organismal behavior, made up of the interactions between “the historical individuals we identify as organisms and the historical individuals I have called strategic genes,” to the relationship between a nation and its citizens. At other times, it helps to have some background in modern biology and its concepts and language, as when he writes, “bacterial recombination involves the formation and dissolution of partnerships between coreplicons or the substitution of one gene for another in a process that has clear winners and losers.” Winning and losing are part of the whole process of evolution but not all of it. As Haig writes, departing from that terminology to add a fresh concept to the mix, “fitness is the telos of our genetic adaptations, but each passion has a proximate telos toward which it cajoles us to action.” That is to say, when we’re hungry, we seek food—and, according to other moods, sex, fame, and the like, a comprehensible notion made all the richer by Haig’s capable layering of more complex ideas. Daniel Dennett provides the foreword.

A challenging though rewarding exploration of the meaning and purpose of life.