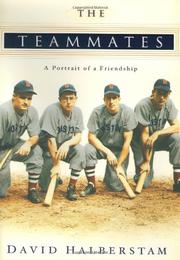 Affectionate, informed, and smooth-as-cream portrait of four Boston Red Sox greats and their abiding friendship over many years.

Even back then, it was “something unusual for baseball: four men who played for one team, who became good friends, and remained friends for the rest of their lives.” Now, writes Halberstam (Firehouse, 2002, etc.), with free agency creating volatility in the rosters and salaries serving to lessen the connection between teammates, this story of Ted Williams, Dom DiMaggio, Bobby Doerr, and Johnny Pesky is especially poignant. All four were Bosox stars in the 1940s and Halberstam re-creates many of the great moments of that decade, though perhaps even more enjoyable here are the sweet nuggets and inside observations of the men—of Pesky taking the fall for a bad play by Leon Culberson that lost the 1946 World Series because of the code mandating one player never point a finger at another, and reminiscing of Yankee pitcher Spud Chandler, “God, he was mean. He'd hit you in the ass, just for the sheer pleasure of it,” and tuning in to excerpts from the Ted Williams Lecture Series. As ever, Halberstam, always a welcome sportswriter, finely delineates the personalities: Doerr's preternatural emotional equilibrium, the guileless Pesky, Williams’s contentiousness, animal energy, and generosity. He also provides enough family history to give a sense of how extraordinary it was these four men came to be such great players, and how each in turn readily acknowledged their great good fortune at having been able to be part of the game at all. And the story lightly revolves around a car trip by Pesky, DiMaggio, and humorist Dick Flavin for a last visit with the rapidly dwindling Williams, highlighting the fact that all of the men may soon be gone and with them a classy style of play no longer in evidence.

A string of pearly anecdotes that reverberate far beyond the diamond.