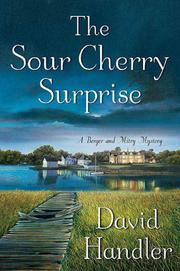 Even in toney Dorset, background checks are advisable.

Connecticut state trooper Des Mitry has her hands full. A flasher is spending his weekend nights ringing the doorbells, but not the chimes, of the town’s rich old ladies. He leaves no clues, escapes notice by everyone but his targets and evades both prowl cars and stakeouts. But Des thinks she has a fix on Dorset’s wanker: Augie Donatelli, a retired New York City cop who became the live-in caretaker at the luxe Captain Chadwick House condos in the historic district, where he drinks too much and insults the residents. Des herself had a serious run-in with him, so when he’s killed by a baseball bat just ahead of where she’d been out of sight tailing him, she becomes suspect No. 1 in his death. Her lover, Mitch Berger, a movie critic and sometime sleuth (The Sour Cherry Surprise, 2008, etc.), thinks the flashing and the killing are unrelated, but to prove it, he’ll have to sip many iced teas with the local gentry, which include a childhood crush of his and the town’s leading lady, and chug a few beers with Des and a cop on vacation from the Big Apple. Meanwhile, unseemly family pedigrees come to light. Des and Mitch romp in the shower, on the beach and between the sheets. And Dorset is once again restored to New England picture-postcard tranquility.

Though you’re not likely to share Des and Mitch’s infatuation with each other, you might just learn not to take everyone at face value.