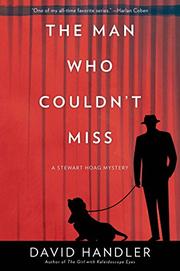 THE MAN WHO COULDN'T MISS

Summer 1993 finds sometime novelist Stewart “Hoagy” Hoag back at work on a new book, happily resident on his ex-wife Merilee Nash’s Connecticut farm, but unable to kick his fatal attraction toward inconvenient corpses in awkward places.

While Hoagy types furiously, Merilee’s taking time out from her Hollywood career to organize a fundraiser on behalf of the storied Sherbourne Playhouse. The weather forecast for the one-night-only benefit staging of Private Lives is dire, but that doesn’t deter Merilee or her co-stars—hunky Greg Farber, his wife, Dini Hawes, and womanizing Marty Miller—from learning their lines and mastering Noel Coward’s comic rhythms. Another dark cloud appears on the horizon when R.J. Romero, a Yale drama classmate who shares a nasty secret with Merilee, pops up like a jack-in-the-box to blackmail her. But the show must go on despite predictions of torrential rain, high winds, and umbrellas galore for both the audience and the stars, though the weather is far from the worst complication in store. The first act goes off without a hitch, but during the intermission, to the surprise of everyone but fans of the series (The Girl with Kaleidoscope Eyes, 2017, etc.), the cast loses one of its leading lights to a killer, and as if on cue, skeletons begin tumbling from closets, revealing the past histories of everyone involved to be even more checkered than the sexual adventures of Coward’s principals. Accompanied by Lulu, his faithful basset hound, Hoagy sidles into sleuthing alongside Lt. Carmine Tedone of the Connecticut State Police. Although he acts on several hunches he coyly declines to share with the reader and drags the cast through an interminable restaging of the crime, he gets to share detecting honors with Lulu.

Familiar premise, busy plotting, stock characters. As usual, Hoagy’s narration is the bright spot in a tangle of intrigue wilder than Noel Coward ever could have imagined.