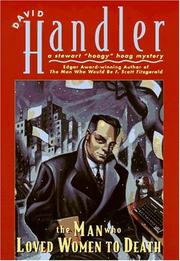 THE MAN WHO LOVED WOMEN TO DEATH

Eighth in Edgar winner Handler's series showcasing rich, cool, self-searching novelist-ghostwriter-to-the-famous Stuart (Hoagy) Hoag (The Girl Who Ran Off With Daddy, 1996, etc.). Hoagy lives in plush New York quarters with actress ex-wife Merilee Nash, their baby Tracy, basset hound Lulu, English housekeeper Pam, and handyman-bodyguard Vic, on leave from Hoagy's Connecticut farm. Jolting the serene ambiance comes a series of manila envelopes, purportedly from a fledgling author-friend, each containing a covering letter and an account—supposedly fictional—of the murder of a woman, each signed the Answer Man. Trouble is, each of these missives is followed by the discovery of a real dead woman—five of them altogether—throwing the city into panic and driving Hoagy into tense conferences with old acquaintance Lt. Romaine Very and his boss Inspector Dante Feldman, of Son of Sam fame. Hoagy is fighting the conviction that the killer is his long-ago closest friend Tuttle Cash—an athletic star who'd once saved Hoagy's life- -now the hard-drinking front for a trendy East Side bar whose violence had, some time back, put his landscape designer girlfriend Tansy Smollet into the hospital for months of plastic surgery. Finally, finally, with a gunshot on the Harvard football field, the nightmare is over. Or is it? A stomach-churning roller-coaster ride of graphic sex, heavy- handed profanity, high-level tension, hip dialogue, and celebrity name-dropping, with occasional affected, smart-alecky airs and way too much of Lulu the dog. No feast for the fainthearted, then, even though most readers won't put it down before the last hypnotic page.