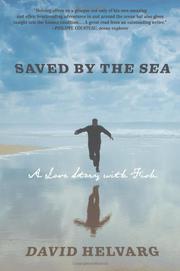 SAVED BY THE SEA

A Love Story with Fish

A call to protect “our blue frontier and last great wilderness commons at sea.”

Helvarg (Rescue Warriors: The U.S. Coast Guard, America’s Forgotten Heroes, 2009, etc.) has led an adventurous life as a journalist, private investigator, producer of documentary films and a political activist. During his boyhood on the north shore of Queens, New York, he witnessed the destruction of the wetlands he loved. While attending Boston University in the late ’60s, he was arrested for participating in an antiwar riot. He promptly dropped out of college in 1971 and moved to San Diego to organize against the war. It was there that he became an avid bodysurfer and began his “lifelong connection to the ocean.” Resuming his education, he transferred to Goddard College, which had a work-study program that allowed him to study urban warfare firsthand in Northern Ireland, laying the groundwork for his future career as a journalist. After graduation, he returned to San Diego where he edited a small weekly newspaper and wrote articles about navy dolphins, navy nuclear weapons, white sharks, offshore oil drilling and other marine topics. He discovered that the two major marine-biological research centers—Scripps on the West coast and Woods Hole in Cape Cod—were heavily involved in Cold War research, to the detriment of oceanographic biology and marine ecology. Although he is a willing risk taker who welcomes the challenges of rough water and covering war zones, he writes movingly about how the “sea, like death, has been the main theme in my life; it has provided rapture, joy, solitude, and solace at different points along the journey.” Now approaching 60, Helvarg has dedicated his remaining years to the “protection, exploration, and restoration of our living seas,” even though he is no longer a young radical.

An elegant memoir of a meaningful life.