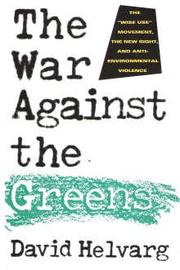 THE WAR AGAINST THE GREENS

The 'Wise Use' Movement, the New Right, and Anti-Environmental Violence

A carefully researched account of the antienvironmentalist ``Wise Use'' Movement, which has launched a ``holy war against the new pagans who worship trees and sacrifice people.'' Helvarg, an investigative reporter and documentary filmmaker, went behind the front lines to interview the movement's leaders, its grassroots supporters, industry and New Right backers, as well as the victims of the rising tide of antigreen violence. Helvarg brilliantly documents the creeping polarization in American life that we see also in such issues as abortion rights and gun control. As much as environmentalists want to preserve nature, some industries want to preserve unlimited access to natural resources, employees want to preserve their jobs, and property owners want to preserve their right to dispose of their land as they wish. The antienvironmentalist backlash, best exemplified by the ``Wise Use'' Movement, has received considerable attention from the conservative press and key figures such as Rush Limbaugh. But Helvarg faults sympathetic coverage in the mainstream press, particularly the New York Times, for giving the movement more credibility and respectability than its numbers and tactics warrant. His investigation reveals that Wise Use/Property Rights activists are few in number and need to resort to intimidation and violence to be effective in local confrontations. He visits an antilogging protester who was maimed by a car bomb, an antitoxics activist who was raped and tortured, and others who were beaten, shot at, had their dogs mutilated, cars run off the road, and homes burned down. He contends that these and thousands of other cases of harassment are effectively silencing many grassroots environmental activists. More disturbing is the lack of interest on the part of law enforcement agencies, including the FBI, in looking into these threats and acts of violence. A thought-provoking and timely exposÇ.