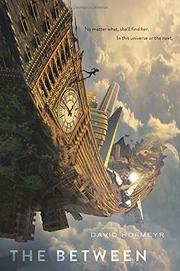 A young woman traverses a space-time continuum to rescue her best friend and secure the future of seven worlds.

When Ana Moon and Bea Gold get into a fight that lands their school bully in the hospital, the two are forbidden to see each other. Ignoring their parents, the London teens meet on the Tube, where they are distracted from their conversation by the appearance of a stranger; handsome Malik Habib can’t keep his eyes off Ana. Suddenly the train crashes, time freezes, and Ana watches her best friend get snatched away by rotten-smelling, winged creatures called Reapers. Then everything starts spinning, Ana falls, and suddenly she is on a quest through the seven earths that make up Hofmeyr’s (Stone Rider, 2015) multiverse: Lūna, Bahram, Hermes, Jöve, Venetia, Kronos, and her own Earth, Sol. She is joined by Malik, Vidhan Blue, and Akuji Na, all of whom are Pathfinders, world-jumping guardians of hidden gateways from one world to the next, like her. An amalgam of various dystopian tropes, the exciting, fast-paced, though sometimes confusing action sequences fill in where the plot and language are a bit stale and dated (Akuji’s androgynous appearance leaves Ana surprised that she should be referred to as “she”). Ana is white, Bea is Jewish and white, and there is diversity throughout the cast.

Serviceable and fun, a basic dystopian novel that delivers action but no original punch.