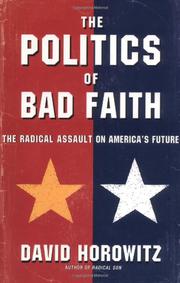 THE POLITICS OF BAD FAITH

The Radical Assault on America's Future

An ineffective diatribe against all things on the left of the political spectrum. Horowitz, president of the Center for the Study of Popular Culture and author of numerous works, including The Race Card (1997) and Destructive Generation (1996), asks if the traditional political appellations of “left” and “right” retain any meaning in post—Cold war America. He answers most emphatically that they do. While he admits that the left may be “rhetorically in retreat,” its goals and agenda, he feels, remain the same and consist of nothing less than —a war against the democracies of the West.” That we don—t see the true nature of the left—whether it now calls itself —progressive” or “liberal” or whatever—reflects, for Horowitz, “the long-standing dominion of socialist sentiment” within our culture. Despite cosmetic differences, the left is of a piece. Grounded in utopian dreams, coming to fruition in the grotesque tragedy of the Soviet Union, the left continues to insist on absolute economic equality and the abolishment of private property. The right, on the other hand, continues to believe in and defend that which is good: the free individual and the free market. Having presented these themes, however, Horowitz really has nowhere to go, and so the book mostly consists of empty rhetoric. If the left is indeed of a piece, and all left argumentation and critique is therefore Stalinist, there is no need for Horowitz to engage with such critique; it’s by definition bad. This all makes for a tremendously boring book; one can only read page after page of invective for so long. Readers will look in vain for the precise scholarship and sound logic of which the often brilliant Horowitz is certainly capable. A thrown-together book with no real purpose. Interested readers will be better served reading the author’s vastly superior Radical Son: A Generational Odyssey (1997).