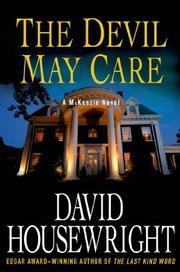 THE DEVIL MAY CARE

Ex–St. Paul cop Rushmore McKenzie, who doesn’t have a PI license but likes to do favors for friends, takes on a job mainly to annoy a Minnesota millionaire and richly succeeds in doing that but not much more.

Entrepreneur Juan Carlos Navarre is too obviously a nouveau-riche immigrant for Riley Brodin’s family to take him seriously, except of course as a threat to their darling daughter and granddaughter. But Riley takes her boyfriend seriously enough to be distraught that he’s been missing for three days, and she wants McKenzie to look for him. McKenzie isn’t enthusiastic until Riley indicates that his search would be a serious poke in the eye to her grandfather Walter Muehlenhaus, the Croesus with whom McKenzie has already crossed swords. Roused to action, he makes the rounds of the people most likely to know what’s happened to Navarre—his ancient landlady, Irene Rogers, who owns the palace he’s rented; her realtor, Anne Rehmann, whose services to Navarre have gone beyond the usual; and Mary Pat Mullaly, the real owner of the restaurant Navarre told Riley was his. Long before one of these helpful informants is raped and murdered, McKenzie has concluded, “I don’t think Navarre is missing. I think he’s hiding”—presumably from the tough guys who've staked out his favorite places, dressed in the colors of the notorious Nine Thirty-Seven gang, which passed into oblivion years ago after its chief financial officer ratted out his colleagues and vanished with their treasury. Who’s in the greatest danger from the new gang: Navarre, Riles or McKenzie himself?

McKenzie, who seems to be channeling the Lew Archer of The Barbarous Coast and Black Money, continues to be more interesting than his cases (Highway 61, 2011, etc.). Maybe he should leave the mystery field and write a memoir or a self-help book.