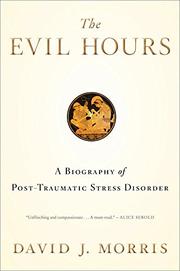 A Biography of Post-Traumatic Stress Disorder

An exploration of the enduring human cost of war.

Journalist Morris (Storm on the Horizon: Khafji—The Battle that Changed the Course of the Gulf War, 2004), a former Marine and embedded reporter who suffers from PTSD, did not intend this book to be a therapeutic exercise, but he discovered that researching and writing about PTSD helped him to make sense of his own struggle with an affliction that “destroys the normal narrative of life.” Drawing on neuroscience, psychology, biochemistry, history, poetry and fiction, he offers an insightful—and never self-indulgent—overview of the “ghost that haunts history.” Among many traumatic stressors—rape, natural disasters, child abuse, for example—Morris focuses most intensely on war. The term PTSD emerged after Vietnam, but Morris discovered that soldiers’ trauma was recognized in Judeo-Christian times, in ancient Greece and in the Middle Ages, when religious authorities imposed “prayer, fasting, and abstinence from communion” on warriors who had killed. Civil War veterans were diagnosed with “nostalgia,” a term “used to indicate a number of conditions that today might be called clinical depression or simple panic.” For World War I veterans, the term was shell shock. Symptoms were common to all: nightmares, flashback memories and paranoia. The author summarizes current cognitive and pharmacological therapies: prolonged exposure therapy, or flooding, which reprises intense trauma; cognitive-behavioral therapy, with roots in psychotherapy; propranolol, to treat anxiety and panic; selective serotonin reuptake inhibitors such as Prozac and Zoloft; eye-movement desensitization and reprocessing; and even yoga. In his experience, Morris has found “alcohol, taken in moderation, is one of the best PTSD drugs ever invented.” Morris deplores civilians’ lack of connection to soldiers’ brutal experiences. If the truth were known, he writes, “we wouldn’t continue to train, equip, and deploy warriors the way we do.” If soldiers were welcomed with empathy, “half of combat PTSD…would disappear overnight.”

An eye-opening investigation of war’s casualties.