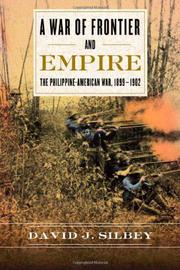 A WAR OF FRONTIER AND EMPIRE

A big-picture account of an unremembered war that has uncomfortable parallels with ugly little wars that followed.

Silbey (History/Alvernia Coll.) maintains academic distance, so let the reader insert the appropriate names. A ruler forges from a congeries of tribes a rudimentary nation. Another nation invades, ostensibly to free those tribespeople from oppression. The invader churns up resistance that truly unifies those hitherto scattered tribespeople. Silbey worries at the outset how to characterize the conflict: “If there was no Philippine nation to engage in war or be conquered . . . what happened in the archipelago from 1899 to 1902 was an insurgency, not a war.” Fine distinctions aside, the Americans certainly considered it a war, and so did the Filipinos, and so did subsequent Filipino historians whose work Silbey takes into account, unlike some earlier histories of what has thus been called the Philippine-American War. Silbey is good on the overall shape of the conflict, whose preamble is rebel leader Emilio Aguinaldo’s innocent remark to American officers: “I have studied attentively the Constitution of the United States and in it I find no authority for colonies and I have no fear.” He had reasons to be afraid, as Filipino forces began to suffer casualties that outnumbered American losses. Massacres ensued on both sides—and Silbey says too little about the American counterinsurgency techniques, among them assassination and torture, that led Mark Twain to suggest that the stars on our flag be replaced with skulls. It was a war against “niggers,” “gooks,” “chinks” and “redskins,” and on this racist dimension Silbey is quite good. When one black detachment arrived to fight, he notes, a white man yelled, “What are you coons doing here?” The reply came from several black soldiers at once: “We have come to take up the White Man’s Burden.”