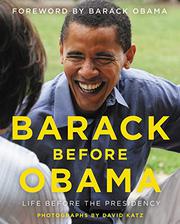 Life Before the Presidency

An appealing pictorial biography of the pre-presidential Barack Obama.

In early 2004, Katz joined Obama’s senatorial campaign as a volunteer driver and then photographer and aide. In this well-rendered photographic celebration, he shows the trajectory of Obama from state politician to leader of the free world. The photos are all high quality and cover a vast range of moments, from Obama getting his haircut by his longtime barber near Hyde Park to the presidential hopeful in tears when he learned, two days before the 2008 election, that the grandmother who raised him had just died. Throughout, Katz emphasizes his theme of the “many small moments in Obama’s life when his political career was just gaining traction.” It all began when the budding photographer decided that the unknown Obama needed “more compelling” pictures on his website. The campaign had only 10 staffers and couldn’t pay Katz, but they offered him a volunteer position. So he spent 10 months driving the candidate around the state before becoming his personal aide. Alongside the photos, the author offers illuminating commentary—on the role of the Secret Service, Michelle’s take, the Al Smith dinner, a rally with Bruce Springsteen—and it’s interesting to consider how Katz designed the layout. He made the wise choice to group together many shots, so we have a set with Stevie Wonder and Robin Williams, Oprah Winfrey, George Soros, Nelson Mandela, the Bidens, and Leonardo DiCaprio, among many others. Along the way, readers will learn how politicians rise as they connect with celebrities and funders, and the narrative is packed with entertaining vignettes. For example, Oprah didn’t think the Obamas’ Chicago apartment was the right setting for O, The Oprah Magazine, so she took the shoot outdoors. The book also features a foreword by Obama himself.

A brilliantly photographed tribute to the rise of the 44th president.