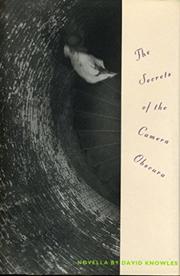 THE SECRETS OF THE CAMERA OBSCURA

Chronicle kicks off a new series of novellas in hardcover (see also Les Galloway's The Forty Fathom Bank, above) with a work highly reminiscent of Umberto Eco (among others) in its combination of historical research and contemporary suspense. Knowles, a professional musician and a product of the writing program at the University of California, Santa Cruz, gives his story an unnamed narrator who owns and operates a camera obscura, a viewing device whose origins go back to 13th-century China. The San Francisco resident also keeps a journal in which he is writing a history of three key events in the development of the camera obscura; concerning respectively its Chinese inventors, Leonardo da Vinci, and Vermeer, the stories each end with a brutal murder by decapitation. Although most of the narrator's customers are tourists just passing through, he has two regular clients, a beautiful Italian woman and an art student named Darin. When the Italian is killed and her head severed, he becomes obsessed with the mystery. The narrative interweaves the three stories from his journals, each of which centers on a betrayal involving the camera obscura and a beautiful woman, with his growing conflict with Darin over what he takes to be the student's presumption about the Italian woman. Knowles does a terrific job with the narrator's evolving voice, which in the beginning is coolly, almost eerily detached, then shifts subtly over the course of the book as he becomes increasingly agitated at the direction the murder investigation is taking. An intriguing first effort, working some thoughtful changes on the idea of vision and the theme of betrayal, marred by a simplistic and predictable trick ending right out of an old Alfred Hitchcock Presents episode.