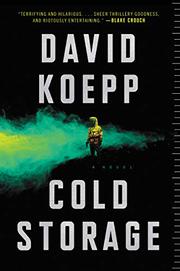 A long-forgotten but deadly organism stored in a deep cave becomes a chilling threat, and a retired bioweapons agent and two security guards are the only ones who can stop it.

Koepp is a very successful screenwriter (Jurassic Park, etc.) and director (Premium Rush, etc.) whose film experience is apparent in this propulsive disaster tale. In the prologue, set in 1987, two agents of the U.S. Defense Nuclear Agency, specialists in neutralizing bioweapons and the like, head for a remote Australian town where debris from the Skylab satellite fell. There, Roberto Diaz and Trini Romano find a bizarre catastrophe: An unknown fungus that mutates with spectacular speed has killed everyone in Kiwirrkurra. Diaz and Romano clean up the mess and contain a sample of the organism, which they deliver to a huge cave under the Missouri River bluffs used by the military as a highly secured storage facility. What could go wrong, right? Cut to the present, when the military has sealed the lowest sublevel of the cave, where the fungus is, and sold the rest of the space to a self-storage company. Add a little climate change to raise the underground temperature, and the novel kicks into high gear. Koepp keeps a tight focus on three characters: Diaz, who is called out of retirement to handle the situation secretly, and two guards at the storage facility. Travis “Teacake” Meacham is an ex-convict trying to get his life back on track. Naomi Williams is a college student with two jobs and a sweet little daughter she’s raising as a single mother. When the two try to track down an unfamiliar warning signal going off in the facility, they find a nightmare. Koepp builds a tight plot as the three race against time and the fungus, a fictional but all-too-convincing monster of an organism that, if it escapes, could bring on global extinctions. Roberto, Travis, and Naomi are engaging, believable characters. Koepp is skilled at sharp, often humorous dialogue, and Roberto’s discovery of the physical barriers to being a hero at age 68 is both darkly funny and an effective source of suspense.

Unlikely heroes battle a frightening fungus that could wipe out humanity in this taut, mordant thriller debut.