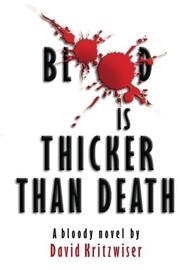 Blood Is Thicker Than Death

A torrid affair between co-workers is the start of a rather convoluted plan to assassinate a dictator who has taken over a northern country in Kritzwiser’s debut black comedy.

The farcical story begins with Moira asking her new lover, Walter, to kill her husband and her father-in-law. Moira’s father-in-law is the Extreme Minister, a tyrant from a country sometimes referred to as the Mythical Kingdom, who banished the former Queen from England. Moira and Walter work at a company called Field Crown; it turns out their boss, Duke, wants the EM dead too. The company, which manufactures fabricated news stories for the EM’s benefit, is really a CIA front, and Duke offers to help Moira and Walter to assassinate the Extreme Minister. Despite a plot dealing with a political assassination, Kritzwiser’s novel is a flat-out comedy. The sexual trysts between Moira and Walter, for instance, which monopolize the first half of the book (if they aren’t having sex, they’re talking about it), are often detailed with campy, explicit language, like the couple’s sexual bout that ends with “an earthquake of superman fury.” And when various agencies step in to either thwart or facilitate the potential assassination, it’s a satirical bowl of alphabet soup, including the RCMF (Righteously Cooperative Military Force), the CESA (Community Employment Security Agency) and the CSIA (Complete Service and Intelligence Agency). Walter’s love of older films and his associating them with his real life can sometimes overwhelm the plot: He cites movies that depict his moods after they’ve already been amply described. The country’s actual name is never uttered, but Kritzwiser drops enough clues that readers can surmise—the U.S. is just south, and Walter’s weapon of choice for the assassination is a hockey stick (for a beheading, no less), prized because it once belonged to Bobby Hull, a well-known Canadian hockey player. For good measure, there’s a mole and endless double and triple crossings.

For those who appreciate dark humor and off-the-wall plots.