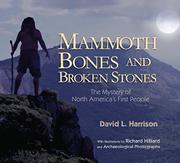 How and when the Western Hemisphere, particularly North and South America, came to be populated continues to be both mysterious and controversial for scientists. Archaeologists plug away with the tools at their disposal but have “more questions than answers.” Harrison does a good job setting the issue in context. He describes the earliest efforts to identify the original inhabitants of the continents, exploring the Clovis culture, believed by many to be the first humans to reach North America. After clearly explaining how scholars decided that they were first, he then lists the arguments against this hypothesis. In the course of looking at both sides, he introduces young readers to “the strict rules of archaeology.” The author demonstrates the precise work of those attempting to understand the hidden aspects of human history and how many of these old questions are seen in the light of new technologies and discoveries. The narrative is aided by both photographs and original illustrations that imagine scenes from both the distant past and the field experiences. (glossary, bibliography, index) (Nonfiction. 9-12)