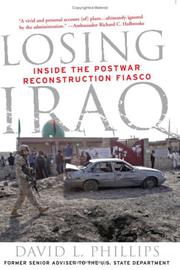 Inside the Postwar Reconstruction Fiasco

Might does not always equal power, strength does not always yield influence, and “winning the peace requires cooperation from freedom’s beneficiaries.” So warns policy expert Phillips (Council on Foreign Relations) in this justly gloomy report.

Saddam was no friend of the Iraqi people, allows Phillips. In areas of Kurdish settlement, he introduced ethnic cleansing methods meant to “Arabize” the population and destroy political opposition; areas of Shia control were bloodily repressed. Despite ethnic divisions that lead some observers to wonder whether Iraq can really be a country at all, Phillips suggests that federalism may be the best hope for an independent nation. Complicating this are all the old scores to settle—not just Shia versus Sunni, Baathist versus Kurd, but also, back across the waters, neocon versus paleocon, nation-builder versus bomb-into-submission old Cold Warriors. In this respect, picture Paul Wolfowitz, who fancies himself an expert on Islam and is demonstrably a hawk, rumbling with Colin Powell, who characterized the weapons-of-mass-destruction ploy as “bullshit”; though Phillips reminds us that Powell eventually bowed to the will of President Bush, it is clear whose side he believes the angels and devils stand. Phillips, like so many others, wonders how it could be that the U.S. backed such a wrong horse as Ahmad Chalabi, who has stood trial for embezzlement elsewhere in the Arab world and seems now to be favored only by a small set of neocons. One answer, he suggests, is that State Department analysts who knew anything at all about Iraq, rather like the “China hands” of old, were systematically frozen out of agencies such as the Office of Reconstruction and Humanitarian Assistance, a civilian and military clearinghouse for transitional management of Iraqi affairs. One result: good military campaign, bad postwar management, with neocons like Wolfowitz brushing aside the concerns and warnings of career soldiers who presumably know something about war.

The occupation, Phillips urges, has been characterized by sheer incompetence. Though there’s little news in that argument—and indeed, little news here—his narrative does a good job of recording a long series of missteps, naming names as it does.