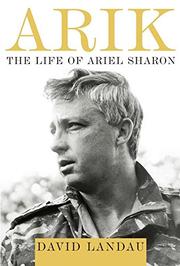 The Life of Ariel Sharon

Economist Israel correspondent and former Haaretz editor in chief Landau (Piety and Power: The World of Jewish Fundamentalism, 1992, etc.) offers a thorough, extremely candid description and assessment of the military and political lives of the controversial Sharon, who has been in a vegetative state since a massive stroke in 2006.

The author, who has also collaborated with Shimon Peres on his memoir (Battling for Peace, 1995) and on a biography of David Ben-Gurion (2012), displays a deep familiarity with the details and contexts of Sharon’s career. Throughout, he prepares us for the stroke in 2006: He calls Sharon “corpulent” in the preface, titles the first chapter “Poor Little Fat Boy” and describes Sharon’s considerable appetite and girth. The early chapters are full of military lore. Landau describes battles and strategy in great detail, clearly examining Sharon’s roles and unafraid to judge. He mentions, for example, a “heinous act of violence” involving some Bedouin in 1972. The author continues to hold Sharon’s feet to the fire right to very end, suggesting things the fallen leader might have accomplished had he been less, well, Sharon-ian. Landau is also adept in the descriptions of the labyrinthine political world of Israel during Sharon’s era. We see, as well, his questionable financial dealings (prosecutors took hard looks at his behavior more than once), his gifts as a politician and his failures as a human being. The author does not focus so much on his personal life, though we learn about the accidental death of his son and his wife’s succumbing to cancer. We also see the softening, leftish moves he made late in his career—moves that pleased many and infuriated others—especially the decision to close 21 settlements in Gaza in 2005.

Splendid reporting, comprehensive research and probing analysis inform this unblinking view of a complicated man and a sanguinary geography.