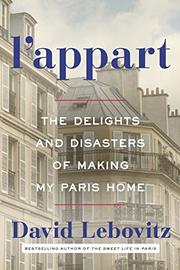 The Delights and Disasters of Making My Paris Home

The tale of an acclaimed chef who decided he wanted to live in Paris—at any cost.

In Lebovitz’s last two books about Paris (My Paris Kitchen: Recipes and Stories, 2014, etc.), it was clear that there was more about the City of Lights sweetly simmering just below the surface ready to be served up. Written in a lighthearted style with healthy dashes of satire, wit, and humor, this book goes into detail about his experience purchasing an apartment in Paris. He had already been renting there, but he simply had to have his own place. Having previously lived in San Francisco—he worked for 13 years at Chez Panisse—Lebovitz felt somewhat prepared since the two cities have much in common. They’re both “famously expensive” to live in and feature “a collection of small villages bundled together,” and the residents love to talk food and dine. With the assistance of his French partner and interpreter, Romain, the author took the plunge. From the start, he knew this would be far more complicated than he realized. First, there were the medical screenings. As his banker told him, “we don’t want you to die.” After deciding where he wanted to live based on markets, bakeries, and restaurants, Lebovitz scoured newspaper listings, met with agents, and talked to owners (that is how most sales occur). After finally finding a place and making an offer, he had to go through a morass of legal and financial paperwork. Nearly a year later, it was his, but much expensive renovation work was still to come, including, of course, a better kitchen and oven. “In addition to my shirt, I had nearly lost my mind,” he writes. Scattered throughout are French recipes, from dandelion flatbread to chocolate soufflé: “Although I have my share of regrets, using good chocolate to make a soufflé isn’t one of them.”

Lebovitz tells us much more than we really need to know, but this is still an engaging, entertaining, and delicious divertissement.