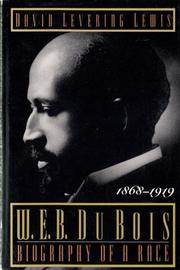 William Edward Burghardt Du Bois (1868-1963) has finally found a Boswell worthy of his achievements as an African-American reformer who fought for human rights in the US and the wider world. In the first part of a projected two-volume biography, Rutgers history professor Lewis (The Race to Fashoda, 1988, etc.) offers a detailed chronicle that puts the eventful origins of a towering figure clearly in the perspective of his troubled times. Born in western Massachusetts less than three years after the abolition of slavery, Du Bois managed to earn a doctorate in history from Harvard. After graduating, he pursued one of the few careers open to educated blacks, that of teaching—at Atlanta University and other institutions. Meanwhile, he published pioneering sociological studies (The Philadelphia Negro, etc.), arranged symposiums, and helped found the Niagara Movement—an all- black group that in 1909 joined forces with liberal whites to form the NAACP. Du Bois left academe to become the NAACP's director of research and publicity as well as editor of its influential magazine, The Crisis. From this bully pulpit, he battled for racial justice; conducted intellectual inquiries (among other matters, on the talented-tenth theory); critiqued the views of rivals like Booker T. Washington (``the great accommodator''); and otherwise played to the hilt the role of outside agitator (he was active in the Pan-African cause as well). Here, he's last seen after a post- WW I congress that called for direct League of Nations supervision of German colonies in Africa, as he himself returns to a society that brutally and methodically excluded ``his people from meaningful citizenship....'' A masterly appreciation of a great man's intellectual development and singular service in a righteous crusade. (Thirty- two pages of photographs—not seen)