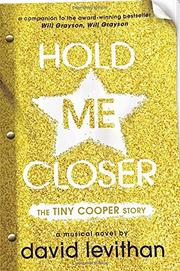 Finally, Tiny Cooper gets his own story: the musical.

Semifresh (four years later) off the heels of his uber-gay and hilarious collaboration with John Green, Will Grayson Will Grayson (2010), Levithan bites the bullet and pens the actual musical script that his 16-year-old large-and-in-charge gay hero created as a centerpiece for the original novel. Tiny’s coming-of-age musical includes his loving parents, his BFF Phil Wrayson (a cautiously disguised straight Will Grayson), a lesbian babysitter named Lynda, the ghost of Oscar Wilde and 18 ex-boyfriends—including the second Will Grayson. There are Barbra Streisand and Idina Menzel references. There are potentially naughty locker-room tableaux. There are debunked stereotypes in the form of song (“OH! What a Big Gay Baby”). There are multiple moments in the spotlight, including solos and addresses to the audience, where Tiny will have readers falling out of their chairs laughing. It’s probably wrong to call this a novel since it’s written as a script complete with acts, dialogue, musical verse and staging instructions, but whatever it is, it’s just as downright ridiculous as its precursor. Shy readers should be warned: Don’t read this in a public place unless you’re very comfortable chortling out loud.