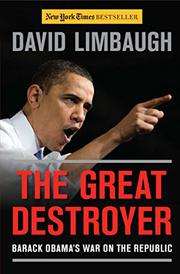 Barack Obama's War on the Republic

Rush Limbaugh’s brother delivers the obligatory Republican diatribe on the reasons our current president doesn’t deserve another term in office.

A follow-up to his former “indictment” of President Obama in Crimes Against Liberty (2010), Limbaugh further dissects Obama’s political behavior, his administration’s “federal interventionism and lawlessness” and what he feels is a blatant attack on American values. What emerges after reading the author’s 12 scathing, relentlessly accusatory chapters is that, in Limbaugh’s estimation, Obama is a near-subhuman disgrace to America. The author sets down incriminations through heavy-handed, melodramatic prose, even suggesting the president has irresponsibly blamed former President George W. Bush for the morally lapsed state of the nation, all while single-handedly bringing America “to the brink of financial collapse.” Limbaugh is an entertainment attorney by trade, so the impressive breadth and comprehensive nature of his criticism on issues like Obamacare, energy prices and legislation, governmental spending and the deficit isn’t surprising (many factual statements are admittedly eye-opening). Also unsurprising is his blasting of Obama for his support of gay rights, abortion, failed foreign policy initiatives, the jobs bill and the immigrant-friendly Dream Act. Limbaugh even finds room to chide Michelle Obama, who, in a 2010 NAACP speech, “portrayed America as though it’s still dominated by Jim Crow-style inequality.” The inclusion of nearly 70 pages of supporting notes and documentation lends some credence to Limbaugh’s arguments, but a lack of authorial personality (humor, hopefulness…anything), nor any nods to the good work President Obama has accomplished (or solutions to the problems outlined), turns all the criticism into a dour, antagonistic manifesto.