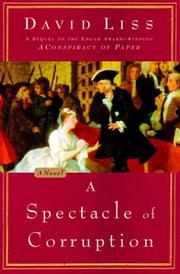 A SPECTACLE OF CORRUPTION

With eloquent wit, Liss manipulates the concepts of misdirection and probability theory in his serpentine third novel (after The Coffee Trader, 2003).

Once again, we meet the unconventional protagonist of the author’s Edgar-winning debut A Conspiracy of Paper (2000). “Thief-taker,” retired prizefighter, and Jew Benjamin Weaver, as resourceful a former rogue as ever, is in peril again—falsely convicted and sentenced to hang for the murder of a dockworker and labor leader whom he barely knew. The year is 1722, and London is abuzz over England’s first General Election, vigorously contested by conservative Tories who support Hanoverian King George I and antiroyalist Whigs, who may or may not be in league with Jacobites plotting the restoration of deposed “Pretender” James II of Scotland. Weaver escapes from Newgate Prison (in a marvelously detailed sequence), and, while laboring to clear his name, assumes multiple disguises and forms affiliations with several members of London’s political, ecclesiastical, and criminal elites. These include the woman he loves unrequitedly, his cousin’s widow Miriam, and her husband, Whig Parliamentary candidate Griffin Melbury; duplicitous parish priest Christopher Ufford (in whose service suspicion for murder had fallen on Weaver); brutal tobacco merchant Dennis Dogsmill and his fetching sister Grace, and numerous other power brokers and ruffians whose allegiances and very identities are seldom what they seem. The dazzling plot, which grows steadily more intricate and circuitous, turns on the allegation that “there [is] a Tory spy among the Whigs,” and the likelihood that Weaver’s victimization is connected to the election that the charismatic Melbury blithely characterizes as “a spectacle of corruption.” Liss’s impressive research provides a wealth of information about 18th-century politics, emergent labor organizations, and gradations of etiquette and malfeasance among contrasting social levels. And Weaver’s somber, wry, knowing narrator’s voice is a deadpan delight.

Furthermore, it all ends with yet another twist that seems to promise we’ll hear more from—and of—the indefatigable Benjamin Weaver. Let’s hope so.