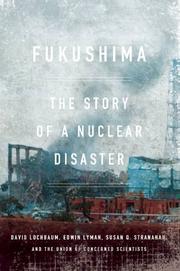 The Story of a Nuclear Disaster

Technical reports written by committee are almost always dull affairs; this is an exception.

The book is a gripping, suspenseful page-turner finely crafted to appeal both to people familiar with the science and those with only the barest inkling of how nuclear power works. Even with the broad outlines of the story in the public record, the authors have uncovered many important details that never came to light during the saturation-level media coverage. The Union of Concerned Scientists has long cast a critical eye on the nuclear industry, and the tone should surprise no one, but its criticisms are balanced, insightful and impossible to dismiss. Reactors are protected by multiple fail-safes, but "[a]ll of Fukushima's defensive barriers failed for the same reason. Each had a limit that provided too little safety margin to prevent error." Essentially, a single unforeseen event, if it exceeds the components' design specifications, will simultaneously disable multiple layers of protection. Furthermore, the safety guidelines proved biased toward "internal events," utterly failing to account for "a sustained total loss of electrical power and the inability to obtain needed supplies because of damaged roads" that resulted from a broader natural disaster. Incredibly, the threat posed by tsunamis on the northeast coast of Japan was never taken seriously; in 2009, Tokyo Electric Power Company management nixed a seawall at Fukushima, concluding, "a tall barricade in front of a nuclear plant would send the wrong message to the public." Ultimately, the authors warn that failure on a similar scale is eminently possible at many American facilities. The fact that worst-case scenarios were finally averted in this instance may be a mixed blessing, as already, new protective measures are being abandoned or watered down, and even in Japan, new nuclear plants are under construction.

The events at Fukushima provided a graphic warning of the dangers posed by nuclear power; the most important question asked by this book is, what will be done about them?