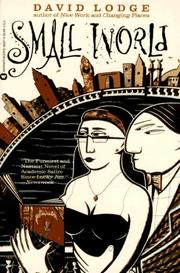 In Changing Places (1975, UK only), Lodge satirized transatlantic academia via a tale of two campuses--as Prof. Philip Swallow (from the Midlands) swapped jobs (and wives) with Prof. Morris Zapp of California's Euphoric State U. This time, however, Swallow and Zapp are just two of the nearly two-dozen principal players--in a sprawling, cartoony, sex-comedy send-up of ""the global campus"": the world of MLA Conventions and traveling lecturers and multilingual translations. (""The American Express card has replaced the library pass."") The first--and best--section is a low-key, fairly lifelike close-up of a particularly dismal English-prof conference, hosted by Prof. Swallow at the dreary U. of Rummidge (i.e. Birmingham) campus: the turnout is paltry; one of the few international arrivals is the ever-venal Prof. Zapp, who's constantly on the road with such addresses as ""Textuality as Striptease""; and most of the focus centers on young, virginal, totally innocent Persse McGarrigie of Limerick U.--who falls madly in love with the elusive Angelica Pabst, a gorgeous expert on structuralism. After this steadily amusing opening, however, Lodge lurches out in all directions--with a dozen international subplots presented merry-go-round style--as the satire becomes increasingly broad, silly, and fragmentary. Persse remains on occasional view, circling the globe in his pursuit of the peripatetic Angelica, who seems to be leaving a trail of sexual decadence behind her. Zapp globe-trots too, finding renewed lust in Italy with kinky Prof. Fulvia Morgana (a Marxist in velvet knickerbockers) before being kidnapped by bookish terrorists. Meanwhile, however: a Japanese translator struggles with the British slang in a novel by burnt-out Ronald Frobisher; a North-of-England prof becomes manically obsessed with ""Computational Stylistics""; the ancient dean of US literary scholarship, Arthur Kingfisher, dallies with an exotic concubine; a middle-aging Australian lecturer yearns after academic celebrity (and sexpot students); a prissy Oxford don contemplates his latest self-serving review for the Times Literary Supplement; Prof. Swallow discovers an old flame (and a paternity surprise) in Turkey; several profs salivate over a newly endowed $100,000-a-year ""UNESCO chair."" And all of these far-flung slivers of farce come implausibly together at the MLA Conference in N.Y.--where Angelica delivers a porno-lecture on the structuralism of romance. . . while the plot tangles are resolved in the style of a Gilbert & Sullivan operetta. Lodge (Souls and Bodies) offers dozens of grandly funny tidbits here--from a conference of scholars attending a Puss in Boots pantomine (by mistake) to a Spenser-quoting airline receptionist to juicy parodies of Barthes-style pedantry. Unfortunately, however, too much of this potpourri falls back on the basic, tired joke of lust-in-academia. And, even for readers who are savvy about Lodge's ivory-tower targets, this hectic hodgepodge may eventually become more exhausting than entertaining--a source of sporadic hilarity rather than sustained or involving pleasure.