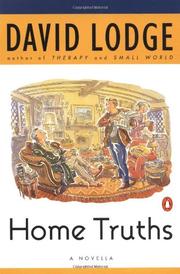 Adapted by the author from a stage play of his own—with the result that it’s, well, a bit stagy—Lodge’s effort even so offers a satiric nougat that’s sweet indeed and less frothy than one might think.

What is a rich, famous, successful, divorced—and lonely—British TV scriptwriter to do when a high-profile interview in London’s Sunday papers turns out to be a scathing indictment of his shallowness and vanity, not to mention his piggish treatment of women? Well, if the scriptwriter is Sam Sharp, who’s heading for L.A. that very morning for some splashy studio work, the answer is this: quickly work up a revenge scenario, the first step being, on the way to the airport, to drop in on your oldest friend, the once-promising but now fallow novelist Adrian Ludlow and Adrian’s attractive wife Eleanor. Sam’s idea: if only Adrian will consent to be interviewed by the same famous but malicious journalist who so disastrously interviewed Sam, Adrian could, well, gather his own information, and, turning the tables, publish a scathing indictment of—ah, yes, of the infamous Fanny Tarrant, who, appearing at Adrian’s house to interview him on the appointed day, turns out to be young, pretty, intelligent, and curiously captivating to Adrian, who will, indeed, tell her far too much, revealing elements of his past that in intertwined ways implicate not only Sam but also unsuspecting wife Eleanor. How could he have done it? And how will all end? On that Sunday morning when the damaging interview is to appear, the reader will be every bit as much on chair’s edge as are Adrian and Eleanor—and will be every bit as surprised, and perhaps as moved, by the outcome.

A deft bit of Lodgian satire of writers, media, and writing—with teeth as sharp as ever, but also with a heart, however little be the book, that’s great, large, and full.