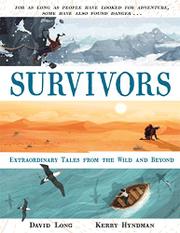 A large-format hardcover gathers together true stories of adventure and survival.

Two that are well-known, at least to adults, are Ernest Shackleton’s ill-fated Antarctic expedition and the ordeal of Aron Ralston, who cut off his own arm with a dull pocketknife in order to extricate himself from a dislodged boulder that trapped him in a narrow canyon, the subject of the film 127 Hours. Lesser known is the story of Poon Lim, who survived 133 days alone in the South Atlantic when the merchant ship he was serving on was sunk by a U-boat. At one point, he caught a shark several feet long, pulled it aboard his raft, beat it to death, and proceeded to suck its blood and eat it raw for nourishment. Seventeen-year-old Juliane Koepcke, the sole survivor of a plane crash in the Peruvian rain forest, relied on survival lessons taught by her parents. During her nine-day ordeal, she poured gasoline on her wounds, which succeeded in removing 35 maggots from one arm. In a skiing accident, Anna Bågenholm was trapped under freezing water for so long her heart stopped. Four hours later, medics managed to warm her blood enough to revive her. The attractive design features a full-page or double-page–spread color illustration depicting a pivotal moment in each well-told story. Entirely absent are such standard features as table of contents, source notes, bibliography, or index, pegging this as an entertainment resource only.