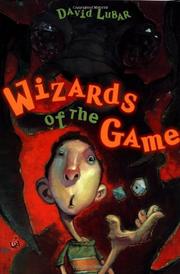 WIZARDS OF THE GAME

A role-playing game draws the ire of both a church group and a quartet of real wizards in this double-stranded, tongue-in-cheek tale from the author of Dunk (2002). To Mercer, a.k.a. Shath’dra the Warrior Mage, “Wizards of the Warrior World” is just a harmless after-school, weekend—and, OK, all-the-time-in-between—obsession. But his classmate Ed thinks otherwise, and after Ed’s critical essay for the school paper is picked up by the local news, so do the anti-witchcraft picketers who appear outside the town’s middle school. Mercer also finds himself being hounded by four ragged habitués of a nearby soup kitchen, who keep calling him “magus,” and seem desperately upset. Lubar sets up the picketers as straw figures, summarily dispersed once Mercer articulates counter-arguments—but it’s an expensive victory, for suddenly cautious school officials also prohibit playing the game on school property. Mercer’s outrage changes to excitement, however, when the shabby four turn out to be weak but genuine magic workers, stranded in this dimension until they can find a fifth wizard to help them open a way out. Mercer’s eagerness to oblige leads to a wild climax, in which the newly opened portal admits a lightning-charged monster—who is fought off only after the previously unassuming school janitor suddenly reveals himself to be a powerful guardian wizard in disguise. The multiple plots and subplots never do quite come together, but the tale moves along briskly to a rousing, twisty finish. Gamers and general light comedy fans will love it. (Fiction. 11-13)