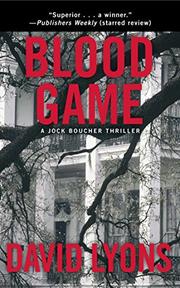 In Ice Fire (2012), the first installment in Lyons' series, Jock saved the world from an insidious plot by strangling two bad guys with his bare hands. Now, shaken by his propensity for killing people, he has decided to leave the bench. Then the president summons him to Washington for a personal talking-to. Temporarily relieved of trying cases, the well-off Jock is assigned to seek out and help victims of Hurricane Katrina and the Gulf of Mexico oil spill. But after he and his police detective buddy Fitch discover a floating body during a fishing outing and Jock is threatened on the street by a gunman he kills with one punch, the judge goes into investigative mode—once again putting himself at mortal risk by looking into Dumont's ties to Mexican terrorists and a brewing conflict over Mexican oil and gas deposits. Dumont, hoping to get a federal judge in his stable, sidles up to Boucher socially, charming him and widower Jock's brilliant, beautiful, Mumbai-born girlfriend, Malika, at his casino. Jock draws unlikely support from a down-and-out shrimper whom he bullies into cleaning up his act. The narrative is peppered with minilessons on past conflicts between the U.S. and Mexico and tourist-guide–like commentary on New Orleans culture, cuisine and physical landmarks (Jock lives in a historical house).

Though not as winning or involving as Ice Fire, this is a solid, engaging thriller with a protagonist cut from a different cloth.