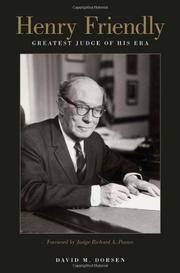 The improbable making of a brilliant jurist.

Hailing from a German-Jewish family in Elmira, N.Y., Friendly (1903–1986) became a top student at Harvard, editor of the Harvard Law Review, a clerk for Louis Brandeis and one of the few Jews in corporate-law practices on Wall Street. After three decades in private practice, Friendly resolved to change careers. With friends such as Felix Frankfurter and Learned Hand bringing his name to President Eisenhower’s attention, he was nominated and confirmed for the Second Circuit, based in Manhattan, in 1959. Dorsen, counsel to Sedgwick LLP, skates over Friendly’s early years as being solid but undistinguished, and organizes his meticulous biography around the judicial themes that Friendly and his fellow appellate judges took up over the decades: administrative law, securities law, federal court jurisdiction and grand jury procedure. Friendly exploded with writings during his tenure, not only in opinions but speeches and articles, and made an indelible mark on cases involving the Fifth Amendment self-incrimination and double jeopardy clauses, intellectual property and copyright, common law and railroad reorganization. He was highly respected by his fellow judges, and Dorsen writes that Friendly was cited in opinions only second as often as Hand. Fairly conservative, cautious and occasionally creative, Friendly would likely have been a “swing vote” on the Supreme Court today, writes Dorsen, as well as a champion of the Legal Process School. Depressive and prone to eye ailments, he committed suicide at age 82.

A dense and lawyerly but sometimes illuminating biography.