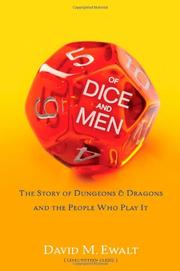 OF DICE AND MEN

The Story of Dungeons & Dragons and the People Who Play It

A child of the polyhedral dice returns to the fantasy game of his youth in a reverential history of the innovative pastime that has launched billions of role-playing adventures.

Before Dungeons & Dragons, those with a fetish for alternate time periods and a visceral need to escape the banality of everyday life would wage tabletop war against each other in meticulously rendered re-enactments of history’s greatest battles. Soon, however, even these highly orchestrated military clashes began to grow a bit tiresome—until someone threw wizards and other magical entities into the mix. Gary Gygax and Dave Arneson are the pioneering duo credited with merging old war simulations with a revolutionary gaming system that removed “winning” as the objective and encouraged imaginative players to keep their adventures going in perpetuity—or, at least, until their characters ran out of all-important hit points. Then again, in D&D, resurrection is never really out of the question, either. Forbes senior editor Ewalt adroitly parallels his return to D&D after years away in the “grown-up world” of journalism with the story of how Gygax and Arneson originally came together in the early 1970s to form Tactical Studies Rules, Inc.; the author also covers the ensuing split between the creators. The former thread, however, is by far the more engaging, as the rise and fall and resurgence of the D&D empire has been well-documented elsewhere. Hard-core D&D followers will find few revelations in Ewalt’s personal dungeon crawl through TSR history. However, for those who don’t know a Ranger from a Rogue or a Hobgoblin from a Halfling, the author’s devotion to the game does much to illuminate role-playing’s enduring power on mortal men and women.

A serviceable history of Dungeons & Dragons coupled with an insightful look at the game’s allure.