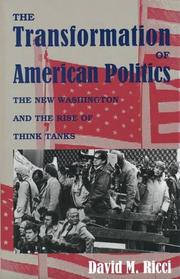 THE TRANSFORMATION OF AMERICAN POLITICS

The New Washington and the Rise of Think Tanks

Ricci (Political Science and American Studies/Hebrew University, Jerusalem) analyzes the growth in numbers and influence of a distinctively modern Washington, D.C., phenomenon: the think tanks. The author, himself a former Brookings Institution scholar, argues that, since 1970, the components of American government have changed fundamentally, led by the decline of party discipline, the end of seniority rules in Congress, and the growth of an independent presidency. Ricci also asserts that burgeoning professionalism, the development of TV, and the refinement of marketing techniques have fundamentally altered policy discourse. He points out that the classical paradigm of American government- -ordinary Americans garnering enough information and wisdom on their own to exercise reasonably the responsibilities of leadership in an orderly democracy—has become outmoded in the modern information age, in which citizens are overwhelmed with a flood of policy-relevant information, and in which diffuse, dissonant groups and points of view influence public policy. Ricci focuses on an alternative model, that of Francis Bacon's The New Atlantis (1624), which described a utopian society guided by the wisdom of scholars working in an institution called ``Salomon's House.'' Ricci argues that ``from time to time and for various reasons, some Washingtonians will reach for reliable information as if it were the sort envisioned by Salomon's House.'' The diverse ideological orientations of the think tanks, he says, have created a ``marketplace of ideas'' that enriches debate by testing a wide range of theories. While Ricci argues that think tanks don't operate exactly how Bacon predicted, he concludes that they do provide a necessary order and coherence to policy debates. An incisive look at the rise of think tanks and at their impact on policy-making.