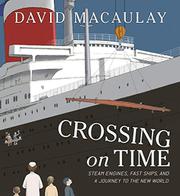 Steam Engines, Fast Ships, and a Journey to the New World

Childhood memories, as well as loads of historical and archival research, anchor a history of ocean liners from the invention of steam pumps to the magnificent SS United States.

Linked by recollections of his own family’s 1957 journey from the U.K. to New York aboard the United States, Macaulay traces the development of steam-powered ships from a small 1783 paddle-driven experiment to the 990-foot monster that still holds the record for the fastest Atlantic crossing by a ship of its type. Ignoring the Titanic-like tragedies, he focuses on design and engineering—mixing profile portraits of dozens of increasingly long, sleek hulls with lovingly detailed cutaway views of boilers, turbines, and power trains, structural elements being assembled (sometimes with the help of a giant authorial hand reaching down from the skies), and diagrams of decks and internal workings. All of this is accompanied by sure, lucid explanations and culminates in a humongous inside view of the United States on a multiple gatefold, with very nearly every room and cupboard labeled. Having filled in the historical highlights, the author turns to his own story with an account of the five-day voyage and his first impressions of this country that are made more vivid by reconstructed scenes and family photos. A waiter in one of the former is the only person of color in clear view, but human figures of any sort are rare throughout.

Personal notes give this stirring tribute to speed, power, and technological prowess an unusually intimate air.