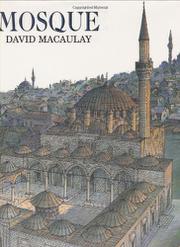 Taking its place proudly among such other monuments of world civilization as Cathedral, Pyramid, and Castle is the subject of Macaulay’s newest architectural exploration. Hewing to the formula established in previous works, the narrative explores the building of a fictional mosque, “modeled directly on existing examples.” After introducing its cast of characters and discussing the socio-cultural importance of the mosque complex, the narrative then plunges eagerly into the meat of the matter: building. Moving methodically around the complex (a progression aided by the glossary in the back), the text and its superb accompanying drawings explain both the religious and structural underpinnings of the mosque. The description of the planned prayer hall, for instance, includes both the importance of its orientation toward Mecca and the system of piers and semidomes that make possible the crowning of a vast square room with a grand dome. The meticulous pen-and-ink drawings are delicately tinted to help distinguish the different structural elements and bring the building to life, both in process and in completion. Magnificent. (Nonfiction. 9+)