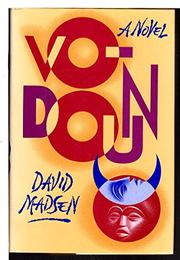 A voodoo curse turns Haitian history into a demented exercise in dÇjÖ vu—from the fevered, all-stops-out imagination behind U.S.S.A. (1989). A year after walking away from high-wire political journalism, Ray Falco feels himself responding to a police siren in the middle of the night and gets pulled into the disappearance of perpetual Haitian activist Jean-Mars Baptiste, driven into hiding by a flayed skin nailed to his door. With the help of contacts like Haitian lawyer Lucy Marcelin and gallery owner Faustin Gabriel, Falco finally persuades Baptiste to meet him—and then, to his own horror and amazement, shoots him down. Clearly, somebody's using voodoo to control Falco—but how's it being done, and what's the point, and why choose him? Driven by bouts of automatic writing in which he reverts to the voice of Nicholas Whitney Townsend, American envoy to Haiti during the 179293 slave rebellion, he gradually realizes that Gabriel and Carmen Mondesir, director of a charitable trust whose charity begins at home, are controlling him through the ascendancy of Gabriel's ancestor Vincent Gabriel, chief of staff to charismatic, illiterate Gen. Xavier Charlemagne. Their purpose is nothing less than the liberation of modern-day Haiti—a deep-dyed plot Falco will both effect (in his capacity as channel for Townsend, whose empty promise of American aid broke the back of Charlemagne's revolt) and legitimate (in his capacity as respected newsman and expert eyewitness to history). Gabriel's motives and plans seem fuzzy and ill-matched to his effects, but the effects themselves—Falco's recapitulation, courtesy of voodoo possession, of 200 years of black slavery—are splendidly overwrought, if you don't look too closely at the climax that gives Falco his one chance to break free of Gabriel's control. A fine frenzy of hectic overplotting, though overshadowed by both the recent explosion of historical pulp fiction and the sad march of Haitian headlines.