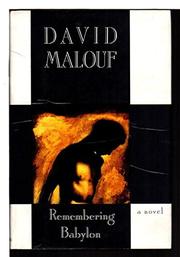 A quietly masterful tale from Australia's colonial past, depicting the savage and painful nuances of racism evoked when a white youth raised by aborigines returns to his own people: from award-winning novelist and poet Malouf (The Great World, 1991, etc.). When Gemmy Fairley encounters the children of Jock McIvor as they play on the fringe of their mid-19th-century settlement in the Outback, a chain of events is set in motion that changes all their lives. Gemmy, cast ashore as a child after a brutal life in the streets of London and at sea, joined the natives who found him, spending 16 years with them before seeking out other whites to find answers to questions about his origin still tormenting him. Adopted by McIvor's family, proud Scottish immigrants, he is accepted by them but not by the community, which views him with distrust as his otherness remains intact—and when native visitors are seen with him, fears of an attack turn the whites violently against him. Saved by Jock—who finds his own growing estrangement from his neighbors a disturbing development that he's powerless to change- -Gemmy is removed to more secure lodgings, but he wishes only to escape and vanishes soon after. Meanwhile, his presence among the McIvor children has proved a turning point for them, as they witness both Gemmy's innocence and the barbarity of others, and in the process the whole family becomes increasingly open to the subtle natural wonders of their new homeland. Delicate but relentless in its focus on the manifestations of racial intolerance, this is enhanced by a naturalist's keen eye for detail, bringing landscape and states of mind together in a probing, resonant vision of discovery and despair.