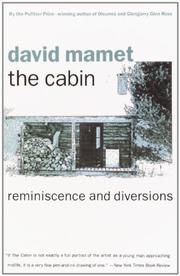 THE CABIN: Reminiscence and Diversions

Third collection of compact autobiographical essays lay the Pulitzer-winning playwright (Some Freaks, 1989; Writing in Restaurants, 1986). The 20 entries here share a tough, masculine flavor: Cigars, guns, beautiful women, and the romance of being a writer on the rise are the commanding notes. Most of the pieces celebrate locales: London, where Mamet scorns the food (""I don't think most Londoners could identify a vegetable with a gun to their head"") but salutes the teahouses; a cabin in Vermont, stinking of wood smoke and kerosene; Cambridge, Mass., where he gripes about recorded music in public places; and, above all, Chicago, home of his boyhood. It was at times a monstrous childhood. In his celebrated flat, precise voice, Mamet records how his stepfather beat his sister, how his grandfather tossed his mother down the stairs. Mamet's deadpan delivery sometimes flowers into hilarity--for example, the time that he, ""a Nice Jewish Boy,"" was forced to eat platters of fried matzo when all he had in mind was sex on a bearskin rug with his latest conquest. Other essays talk of summer camp, listening to the radio, working in a truck factory, the ""friendly and hospitable fraternity"" of gun-shooting buffs. The characters, mostly men, are unforgettable, even if they appear only for a paragraph--such as Louis Herrmann, eye-doctor brother of composer Bernard Herrmann (""he was a beautiful man""). Once or twice, the prose is so lean that it turns artless--a report from Cannes becomes a laconic dribble bleached of emotion. Mostly, however, things crackle; Mamet offers a tribute to T.H. White's The Goshawk that fits his own work as well: ""The prose is hard and clear as crystal. It is unsentimental, it is simply written, it is a delight and an inspiration."" Like the title says, not a mansion, not a cape or a ranch, but a cabin of words: bare wood and nails, hammered tight.