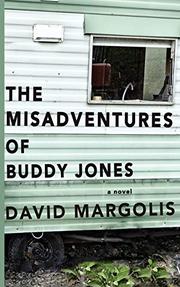 THE MISADVENTURES OF BUDDY JONES

In this novel by Margolis (The Myth of Dr. Kugelman, 2015, etc.), a self-proclaimed “redneck” travels to meet with a daughter whom he has not seen in 20 years and makes friends with an African-American Civil War buff.

Buddy Jones lives in Middleberg, a fictional town in Missouri. He enjoys drinking and demolition derbies, and he likes to have a firearm nearby “at all times.” As he’s grown older, he’s developed numerous ailments, including a “mule-stubborn back, bad knees, and a clogged heart.” Still, he still has plenty of vigor when spouting his racist and misogynist viewpoints. After splitting up with his girlfriend, Penny, he heads to Atlanta to meet with his estranged adult daughter, April, whom he hasn’t seen since she was 8. He hitches a ride with Floyd Washington, an exterminator and Civil War aficionado who’s traveling to visit the grave of his great-great-grandfather Ebenezer Washington, a slave who later fought in the 44th United States Colored Infantry. Buddy narrates ruefully, “It made me uncomfortable to travel with a black man, but what choice did I have?” During his journey, Buddy learns firsthand about the prejudice that black Americans face on a daily basis, as when a white highway patrol officer pulls Floyd over for no apparent reason. But will Buddy’s new experiences alter his bigoted worldview? Margolis makes a point of highlighting his main character’s lack of education, as when Buddy remarks that he’s not “sofisticatered.” The author also doesn’t hold back when demonstrating the degree of his protagonist’s bigotry; for example, Buddy refers to a turban-wearing waiter as “Alibaba” and a “camel jockey,” and calls Hollywood movie actors “left-wing faggot[s].” Buddy is also revealed to be a staunch supporter of Donald Trump. Margolis offers a poisonous caricature of blue-collar, right-wing, white-American masculinity. Some readers may balk at this stereotype, while others will delight in its savagery. For the most part, the author is an observant and skilled satirist. However, Buddy’s relentless racist tirades seem like overkill and ultimately make for a tiring read.

A satire that shines a spotlight on intolerance but offers little hope for change.