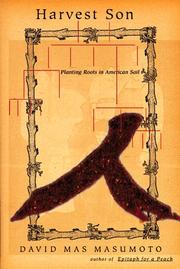 The richness of Masumoto’s earlier memoir (Epitaph for a Peach, 1995) about life as a Japanese-American farmer in California is generally lacking here. The problem: Masumoto never quite settles on a subject or direction. Instead, the narrator ventures all over the place, ranging from a discourse on raisins to an evocation of the community “hall,” and from his “chairmanship” of a neighbor’s funeral to the joys of sweating. Some of it’s interesting; the writing is often quite good, even if disconnected or chronologically challenging. Located in Del Rey in California’s Central Valley, the author’s 80-acre farm—20 acres for peaches, 60 for grapes—was purchased by his father rather inexpensively because fully a fourth of it was considered worthless. Covered in “hardpan,” a layer of clay and minerals hardened into rock, the property was cleared over a period of years, “and now lush green vines grow,” producing as much as two tons of raisins per acre. As Masumoto prunes his grapevines, he thinks of his jiichan, his grandfather Masumoto, who arrived in California 100 years ago to work in a vineyard, though he’d never seen a grape. The author traveled to Japan after his college days at Berkeley to study and work with distant relatives, most of whom scarcely knew his family. Then he resumed working with his father on the farm, enjoying the daily grind. As in his first book, Masumoto writes wonderfully of his crops and the challenges of keeping a small farm going. If it had been presented as a collection of vignettes or essays, this might have summoned up more literary or personal energy. But ill-arranged slices of life do not a memoir make. (Author tour)